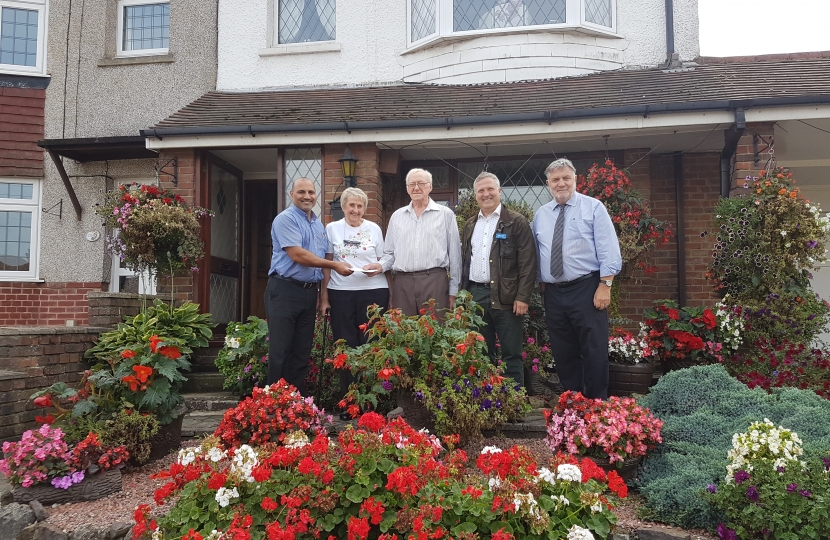 This year's fiercely fought Medway Blossoms gardening competition saw Ann and Derek Holden from Wainscott triumph, as their colourful garden resulted in the couple being declared the proud winners of this year’s competition.

Ann and Derek revealed that their approach of ‘teamwork at its best' was behind their success, and were presented with a £100 garden centre voucher by competition sponsor Chahal Gian from McDonalds restaurant in Chatham, alongside Councillors Rupert Turpin and John Williams.

Cllr. John Williams said, “This year there was an extremely high standard of entries and it was a close-run competition, Ann and Derek were the eventual winners because they didn’t put a foot wrong. Everything about their garden works. Like most good gardens, the Holden’s plot feels bigger than it is, and from the house you only catch tantalising glimpses of what lies in store”.

Cllr. Rupert Turpin said, “Although there are distinct areas – all the parts of it seem to flow seamlessly into one another. The quality of their design, plant combination and cultivation is outstanding. All the elements work so well in harmony.’

Patricia Iles, from Rochester won second prize, with Bob Archer from Strood claiming third. They won £50 and £25 worth of Garden Centre vouchers respectively. Paula Tumber, from Chatham, took home the people’s choice winner as voted for by the public on Facebook, and was awarded a £50 garden centre voucher.