At yesterday’s meeting of Medway Council’s Conservative Cabinet, members strongly rejected proposals from the Department for Communities and Local Government which would see an unrealistic and totally unacceptable increase in the levels of housing required within Medway.

Independent consultants have previously determined Medway’s Objectively Assessed Need (OAN) for housing as 1281 dwellings/year. This figure has been used as a core component of Medway Council’s Local Plan to assess the housing needed over the period covered by the plan (2012-2035). This work has already produced the ambitious figure of 29,463 homes required by 2035, which the Council has been tirelessly working to identify the land and infrastructure necessary to facilitate delivery of. However, the flawed proposed government methodology would see a 29% uplift in the level of housing to be allocated to Medway, calling instead for 38,295 houses in the same period.

The Government may state that its approach represents a 5% increase across England, but there is significant variation in this figure. Within the South East, the average rise is an appalling 35%, yet the Conservative Group is disgusted to find that there are other local authorities who have in fact seen a fall in their level of housing need. Such authorities are largely in the North of England, reflecting the disjointed and disproportionate nature of this policy compared to the efforts the Government has already been making to rebalance the economy and deliver the infrastructure in the North that would be able to support these homes.

‘Medway, like most of the South East, is an area already straining at the seams to accommodate the originally proposed level of growth, and therefore any increase to this figure will absolutely not be tolerated by Medway Conservatives.

Whilst the Cabinet recognises the need for housing, and is already leading by example through the establishment of its own Housing Company, the sustainability of the Government’s plan must be seriously questioned. Medway simply does not have the physical or social infrastructure to cope with any increased housing target. It is extremely unrealistic of DCLG to propose a change of target in the face of developer’s reluctance to build homes, and a current lack of skilled workers to deliver these homes.

Myself and my Conservative colleagues implore the 3 Medway MPs, and other Kent Authorities and MPs, to follow suit in conveying to DCLG the severity of the concerns we have here in Kent and Medway. If the Government were to ignore comments from this Council, not only would this jeopardise the reams of work that have already gone into the production of Medway Council’s Local Plan, but we face a scenario in which existing housing delivery targets will not be able to be met. On behalf of Medway residents, the Conservative Group will not stand idly by whilst our green spaces and our housing market are decimated.’

For further information please contact: Naomi Collison, Political Assistant to the Conservative Group at Medway Council on 01634 332515 or naomi.collison@medway.gov.uk 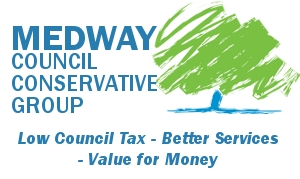